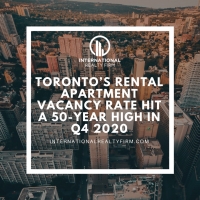 The rollercoaster of a year that was 2020 concluded with rental apartment vacancy rates in Toronto hitting a record high in the fourth quarter.

However, when excluding new buildings typically offering higher rents that finished construction in 2020, average GTA purpose-built rents declined 8.9% year-over-year or down 5.7% on a per square foot basis.

The decline in rents was additional to incentives, as the majority of rental buildings surveyed continued offering incentives in the fourth quarter to attract new tenants, which included perks such as two months’ free rent for new residents.

Looking ahead, 18 rental projects (15 in Toronto and three in the 905) totalling 4,977 units are scheduled for completion in the GTA in 2021, representing the highest total since 1993.

According to the data, rental lease transactions in the GTA increased 25% to a record high of 38,366 units, while the number of units that became available for rent increased by 46%. This resulted in a 162% annual increase in year-end active listings to a record high 8,066 units.