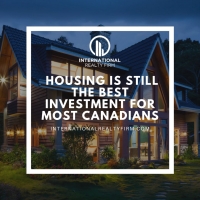 Why Housing is Still the Best Investment For Most Canadians

Nowadays, owning a home remains the largest single investment for most Canadians. The Canada Mortgage and Housing Corporation (CMHC) recently warned the pandemic and resulting lockdown of the economy could drive the country’s average home prices down by between nine per cent and 18 per cent, as job loss and uncertainty force many Canadians to the sidelines. The federal housing agency expects the housing sector will not return to pre-pandemic levels until the end of 2022. According to the CMHC, average Canadian house values have increased by over five per cent annually over 25-year periods going back to the Second World War.

That includes the 2008 global financial meltdown when predictions for a housing market collapse never materialized. Many homeowners have already benefited from the pre-pandemic housing boom, and for new homeowners, any decline over the next three years can easily be absorbed once the market gets back on track. For potential homeowners, the next three years could finally open an affordable window to the residential real estate market. One of the biggest pre-pandemic risks in the housing market was the threat of higher mortgage rates, but massive government spending and the resulting drag on economic growth mean that borrowing rates will likely remain low for a long time.

What really sets a home apart from any other investment is its intrinsic value. A home is considered real estate. That means it is a real, tangible, asset and will always have a significant basic value. Other equity investments have intrinsic values, but they can be difficult to measure consistently in relation to their price.