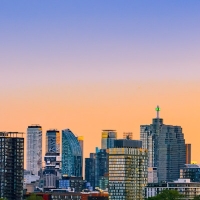 While 2019 was an exceptional year for the Greater Toronto Area’s real estate market, with commercial and new home sectors experiencing growth over 2018, potential homebuyers are now showing hesitation heading into 2020, according to a new report.

The report, which was released Thursday, gives a comprehensive review of the real estate market in the GTA based on data from the Altus Group. This includes the performance of investment property sales volumes, land markets, commercial leasing, and the new home sectors in the region.

Patricia Arsenault, Executive Vice President, Data Solutions at Altus Group, says investors continued to have a strong interest in commercial properties in 2019, which resulted in a 7% increase in overall investment property sales.

On the other hand, new home sales performed “even better,” rebounding an impressive 47% overall due to end-users and investors showing renewed interest.

“2020 promises to be another solid year for new home sales and commercial property investment in the GTA, although uncertainty with respect to the global economy and geopolitical risk, combined with dampened homebuying intentions, could cut the recovery short,” said Arsenault.

Taking a look at the region’s commercial real estate market in 2019, the report praises the sector’s strong activity during the fourth quarter, which saw total investment property sales in the GTA hit $22.6 billion for the year, which is the second-highest annual volume recorded in the past ten years.

However, the rental apartment sector was the star performer in 2019, setting another record high for investment volumes with $3.8 billion in sales, up 40% over 2018, according to the report.

The industrial sector also set another record high, up 31% year-over-year to $4.4 billion, while the office sector hit its own new high at $4.1 billion, up 2% from the record set in 2018.

The region’s new home market also experienced notable growth in 2019, with sales in the GTA experiencing a major rebound after hitting a 22-year low in 2018.

Altus Group cites lower mortgage interest rates and “the release of some pent-up demand,” which led new home sales to bounce to just under 36,500 units in 2019.

When looking at new single-family home sales, there was a total of 9,523 detached, linked, and semi-detached houses and townhouses (excluding stacked townhouses) sold last year, a feat that’s 2.5 times the level of 2018.

However, the report noted that while the downward trend in new single-family home sales came to an end in 2019, sales remained well below the 10-year average.

The benchmark price of a new single-family home in the GTA hit $1.09 million, about 17% below the peak reached in July 2017. Altus Group says an increase in product availability in more affordable areas was a contributor to price moderation.

And while Toronto is known for having the most expensive condos, in 2019, the benchmark price of a new condo in the GTA reached an all-time high, breaking through the $900,000 threshold for the first time ever.

Turning to 2020, Altus Group says fewer households in the GTA are planning to buy, according to a survey it conducted toward the end of 2019. This includes renters, with only 14% showing interest in purchasing a home, while current homeowners also expressed a lower interest in buying a home in the next year than they did in 2018.

“Growing uncertainty with respect to the economic and job outlook, along with affordability concerns as prices started to rise again, likely played a role in dampened homebuying intentions,” said Altus Group.

Although, there is still some good news. Altus Group says the desire to own a home still remains important to renters under 45 years of age, with 1-in-3 saying they are still saving for a down payment on a home, while only about 1-in-9 indicated they actually prefer the renter lifestyle.