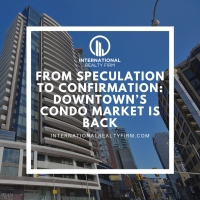 From Speculation to Confirmation: Downtown’s Condo Market is Back

Share
In 2020, the turn of the decade for condos started out strong — sales were up ~10% and ~25% year-over-year in January and February — but when COVID-19 hit the city, the inevitable followed. That inevitability is a major drop in sales activity as would-be downtown dwellers thought twice (or, perhaps more accurately, three or four times) about actually moving into the core.
While in early November, we cautioned downtown condo investors (and, really, anyone interested in jumping into the sector) that the time was not ideal to strike but, instead, to watch and wait, by January it seemed patience had already proven itself a virtue.
Industry insiders said then that they expected the trend would carry on in the months to come.
The surge in condominium sales is being largely driven by demand from investors who are jumping in, not necessarily end-users or [people] buying the first-time condo.
At this point, there’s no denying that the condo market is back in action.
But while the sector’s activity may be zooming full-speed ahead, prices haven’t caught up yet.
Bringing the projected play-out full circle, TRREB’s report predicts “if we continue to see condo sales growth outstrip condo listings growth, we could start to see renewed growth in condo prices later this year.”
More recent data from RBC echoes this prediction. Speaking to the recent surge in condo sales, the bank’s report states “renewed demand for condos was seen throughout the Greater Toronto region. The document furthers the theory that “relative affordability may also be boosting condo’s appeal.” Like TRREB, RBC also notes the inventory situation is rapidly evolving, which could lead to an increase in prices later in 2021.
Reference: https://cutt.ly/xkT3jGR