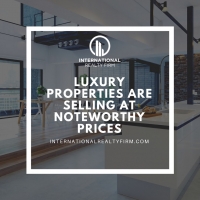 Share
From condominiums to detached houses and townhomes, the Greater Toronto Area has an ample supply of luxury properties, and they are selling at noteworthy prices.
According to local real estate news outlet, Toronto Storeys, some of the most expensive condos were sold in Toronto in the past month. For example, in September, a two-bedroom and two-bathroom condo in Yorkville sold for $7.1 million. This was followed by a two-bedroom, three-bathroom suite selling for $2.95 million in the heart of the city’s Entertainment District.
But this has been par for the course for most of 2020, with reports of notable spikes in demand for luxury real estate throughout the Greater Toronto Area. Even secondary markets, such as Hamilton-Burlington, are seeing their luxury markets swell with activity. High-end buyers are searching for more square footage and larger properties that are situated outside of city centres.
Even more interesting is that domestic buyers have been setting their sights on luxury Toronto real estate even before the coronavirus outbreak. Sales of homes priced over $5 million were up 8.5 per cent year-over-year, between January and October 31, 2019, while transactions of $2-million homes were also up nine per cent year-over-year.
For months, there have been continuous discussions pointing to the slow exodus of city dwellers in search of larger homes in suburban or rural areas far from the city core. But while many people are heading for the suburbs, there remains a strong subset of buyers who are on the hunt for an upgraded living space who aren’t willing to leave their urban area code. These are the buyers who may be trading in their multi-million-dollar condominium in the Financial District for a detached house in Leaside.
Reference: https://cutt.ly/hgkDc0w