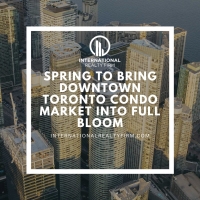 With two months of snowballing activity increases under its belt, Toronto can trust its downtown core is back in action. The appeal of downtown had been, not necessarily the home that you’re living in, but the lifestyle and the people around you. But despite the happenings of the last year, that preference — for a home in the middle of it all — isn’t one that’s faded. There’s certainly a marked turnaround in demand for condominium apartments to the point where they have seen very strong sales growth. The softness in the condo space can be sustained over the next few months, but they believe that in the second half of the year and clearly into 2022, we will see an increase of activity in this market, and it’s starting, already, to stabilize. If you think about the targets [the federal government has] set for immigration for the next three years, they’re very, very high. The GTA will be the greatest beneficiary of that from a metropolitan perspective. It’s safe to assume that, looking ahead, the core is going to be increasingly bustling. Especially when compared to the last 12 months. There will be other changes, too; the downtown experience is no doubt changed. But changed doesn’t mean bad, and it also doesn’t have to mean less good than before. In fact, while the last year has been a tumultuous one, its happenings have presented opportunities for adaptation which will, ultimately, improve life in the core. As sales surpass listings but — for now — prices don’t illustrate fierce competition, anyone keen on spending spring and summer 2021 swimming through the downtown condo scene ought to dive in. The water’s just right. Reference: https://cutt.ly/ylXYAvX